BBQ – My grandmother lived in what was once the City of South Norfolk, and is now a suburb of Chesapeake, Virginia. Her home was four miles more or less from a major railroad junction. There at the crossing was a grocery store called Hutchison’s.

Today we might consider it a quick stop shop, but in fact, it was a full-service grocer with a complement of staples, vegetables, dairy, and a staffed meat counter. So outstanding were their meats that the Hutchison Brothers opened a drive-up lunch counter on the backside of their store. Hamburgers, hot dogs, fried chicken, and what I consider the most amazing chopped BBQ in history was served.

Which brings us to the Jiggy with the Piggy festival in Kannapolis, NC. This premier event has been named one of the Top 20 Events by the Southeast Tourism Society. It is a three-day affair held each year in May on the beautiful NC Research Campus. During the festival, there is a lot going on. Jiggy with the Piggy includes a Kansas City Barbeque Society Competition, Rides, 5k Walk/Run, over 100 artisans, Concerts, a Friday Night outdoor family movie, an All You Can Eat Pancake Breakfast, and People’s Choice BBQ and Wings Tasting.

Since Hutchison’s closed so many, many, many years ago I have searched for a BBQ with a similar taste. The Jiggy event brought together 60 BBQ professionals from over all the state of North Carolina and beyond. Trust me, the aromas at this festival will blow your senses. As first timers to the festival, we did not time our arrival well. The line for getting a sample taste of any of the BBQs was already epic. We choose therefore to buy directly from one vendor.

There is A LOT of debate among BBQ lovers regarding, well, “everything” when it comes to the preparation and serving of Barbecue, Bar-B-Q, BBQ. I confess to being an eastern man, and so my tastes run more to that style. I will say that the BBQ I tried at the Jiggy festival did not match the taste for which I quest.

HONEY – One thing that did tickle our taste buds was honey from Herbs Honey Pot. For most of my life, I always assumed honey only came in two flavors – clover and orange blossom.  Then 10 years ago at a different festival, I met a bee & honey man from Lebanon, Va. He had jars of honey produced from an unbelievable variety of plants and flowers. Like sampling wine, I discovered a completely new world of 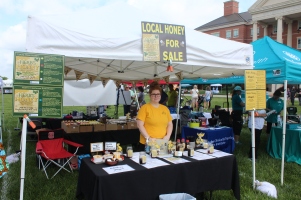 honey tastes, and would later discover honey infused with cinnamon, vanilla, and more. (Wildflower & Thistle honey is just awesome.) Since that time I never miss an opportunity to taste honey, because just like wine, when everything is working right that batch can be amazing. Herb’s gets their honey from all over the state of North Carolina, and has it divided, and rated in 7 different categories. Just like wine, you have honey with a bit of a cool mint taste, some are slightly sweet, or buttery, or even have an apple taste. We tried them all and decided on the Queen City Gold, which we have been enjoying in our tea, and on pancakes. 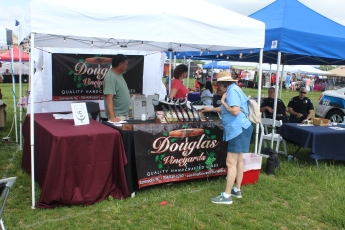 WINE – The growth of the wine industry in North Carolina guarantees that there will be several vendors at a fair. We stopped for a tasting at two – Douglas and Rocky River Vineyards.  Rocky River uses Carlos and Noble Muscadine grapes from their own vineyard in Midland, NC. While Douglas, located in Kannapolis, specializes in sweet fruit and muscadine wines. Both locations had some good wine, and we almost stepped off the beaten path with a bottle of Just Peachy from Douglas. However, since both locations were close enough for proper visits to their respective wineries we passed on purchases in favor of a later road trip and tasting experience.

ZUCCHINI 600  – There were lots of things to see at Jiggy with the Piggy, but one of the surprising highlights was this free race for kids. The Zucchini 600 is a competition to see who can build the fastest, most creative, and most nutritious cars out of zucchini. There were two age groups: 8 and under and 9-14. Three awards were given in each age group: fastest, most creative, and

most nutritious. Very similar to the Boy Scouts Pinewood Derby, the Zucc 600 encourages racers to use their imaginations, but NO motors, batteries, rubber bands or other propulsion enhancers.  It was really fun and exciting to watch these kids compete and to see the many different ways vegetables can be used in the construction of a racer. I don’t know if this is a regular festival feature. If it is, I can only advise everyone attending to check it out for himself or herself. (To be a kid again!)

The Jiggy with the Piggy Festival featured lots of vendors selling baskets, quilts, photographs, and all types of memorabilia. There was a huge family theme park with rides and bounce houses. Besides BBQ, other truck vendors were on-hand offering up tacos, seafood, and hamburgers. We enjoyed a delicious slice of apple pie from one vendor. Mark your calendar for May of next year for Jiggy with the Piggy. We will be there early to get our place in the sample tasting line. Hope to see you there.