As a youngster, I was a big fan of the television series – The Man from U.N.C.L.E. In the late 80s, I was flipping through a magazine when I spotted an article about the collectability of the paperback series tied to the show. As a chronic pursuer of used paperback books, I added the titles to my lists and started buying. Of the 23 books printed, I managed to pick up 11, before I confess to losing interest in achieving a full set.

Now fast forward to the 2020 pandemic and the desire to read something nostalgic, and hello, Mr. Solo and Mr. Kuryakin. I glanced over the books in my collection and noticed that three of them were by the same author. This intrigued me. I’d never paid any attention to the writers of these adventures and had assumed that Ace Books had used a house name for the entire run.

David McDaniel penned six books in the series and contributed more background to the U.N.C.L.E world than the TV show. The biggest of which was giving U.N.C.L.E.’s arch adversary THRUSH a backstory, which connected it to Col. Sebastian Moran, and Professor Moriarty from the Sherlock Holmes family of crime characters. One odd note about Mr. McDaniel was his participation in the Los Angeles world of science fiction fandom, where he used the pseudonym Ted Johnstone. Making him one of the few authors to write under his real name but conduct his social life under a pseudonym. (I think this is popular on Twitter today.) McDaniel died at the age of 38 in 1977. 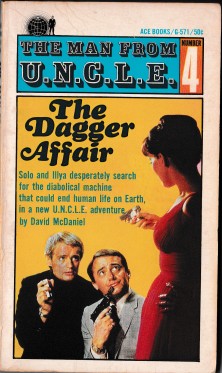 The fourth book in the series and the publisher’s first really big seller – The Dagger Affair was written by McDaniel. His passion and love of the show shine in this book. Instead of an U.N.C.L.E. and THRUSH battle, we have the enemies joining forces to fight another foe with plans to destroy the human race.  The dialogue between Napoleon and Illya is spot on, and you can see the actor’s faces throughout the story. We get a nice feel of America in the 1960s, but some of the story is dated, but enjoyable. You will instantly recognize our master villain’s weapon as one that uses an electromagnetic pulse to disable trains, planes, and automobiles. But in those days EMP wasn’t an acronym.  If you see this paperback at a flea market, library book sale, and in one of the few remaining used bookstores, I’d recommend putting down a dollar or two and buying it. 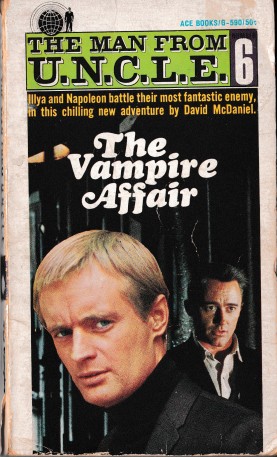 I am sure the title – The Vampire Affair – helped to make this one of the biggest sellers in the U.N.C.L.E. series. Don’t be fooled. I found this book to be a meandering maze of silly text and a poor story. The book opens well, with a lone figure pursued through the woods by wolves, and then…

“There were only the two small holes in the neck, and a complete absence of blood.”

After that, we do a lot of traveling, driving around, walking in the woods, and endure scenes best suited for a campy horror film. With Batman the king of television in 1966, the U.N.C.L.E. series would adopt that tongue in cheek over the top style to remain competitive. McDaniel’s storytelling reflects that change.

Even if you love, vampires, avoid this book. You will be disappointed.

The eighth book in the series is The Monster Wheel Affair. McDaniel drops the exaggerated melodramatics and gets back to secret agent stuff. I confess that this book reminded me somewhat of a Clive Cussler, Dirk Pitt adventure, without the historical angles. When a gigantic space station begins orbiting the planet and threatens to launch an attack on capital cities, Solo and Kuryakin must unravel the plot.  There is some traveling in this story, but it all blends nicely and moves quickly with plenty of action. Secret bases, mini-submarines, high-tech gadgets, outer space, and a clever scheme at world domination make this a must-read. Grab this one if you see it on sale.

The nice thing about The Man from U.N.C.L.E. book series is that they are all original novels. You’ll find many times when reading these print tie-ins of that era, that they just feature expanded rehashes’ of various episodes shown during the network run.

I can’t speak for the other authors of the novels, but McDaniel was a fan, and his work can be called true Fan Fiction. It isn’t award-winning writing, but all these writers were getting one-time payments to pound out stories they’d never earn royalties from. The story might be their brainchild, but the cast of characters was developed and owned by others.

There are hundreds of old TV tie-in paperback books floating around out there and McDaniel wrote for The Prisoner series. His book, The Prisoner: Number Two, also known as Who is Number Two, is the second in the series based on that TV show.

I close with something that might interest you if you aren’t game to search (or pay) for copies of the above. McDaniel was hired to wrap the series up when the show was canceled by NBC, but he missed the deadline. Fans of the show, and the books posted his manuscript online as a PDF. Here is your link to: The Final Affair.