The Bright Side of Going Dark

I absolutely loved this book. It is different, fresh and readers can relate to the characters. The Bright Side of Going Dark is accomplished and exemplary writing by Kelly Harms. 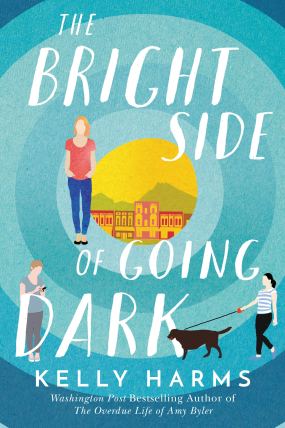 Mia is an internet influencer. She lives in LA. She has half a million followers. She began her career as a yoga instructor. When her three-legged dog, Mike began appearing in her Pictey posts, Mike and Mia became overnight internet celebrities.

Mia’s followers believe every word she writes in her posts, and Mia lives each day for the “Likes” and thousands of emails from her fans. Strangers they may be, but their loyalty attracts sponsors who are willing to hand out freebies (and pay the bills) to have their brands in pictures with Mike and Mia. However, just how true to life are Mia’s posts? What is she hiding?

Paige Mason works for Pictey and is familiar with Mia’s account. She lives in Silicon Valley. Paige is paid to flag inappropriate posts, decide if posts are dangerous or racists, and deal with cyberbullying by pulling those accounts deemed unnecessary or unsafe. Paige is one of the millions of IT gurus paid extremely well to do her job. She is a quality enforcer, better known as one who does not socialize and therefore unfamiliar with many behavioral traits. She has no friends. Paige is a loner by most standards and her coping abilities can be questionable.

Tucker is Mia’s fiancé. Maybe. We will have to watch the @TuckerlovesMia! Pictey account and see their future unfold.

Jessica Odanz is Paige’s half-sister. She is a college student in Colorado. She’s a young 20ish who lives each day by following @TuckerlovesMia! But Jessica is depressed. When she reaches out online to Mia about a possible suicide, Mia flags her comment. Pictey flags her account.

Pictey calls in Paige and puts her on family leave to work with her half-sister. But Paige and Jessica only see each other at Christmas and aren’t close. And Paige is hesitant to reach out to a sister who is suicidal. Why?

Read how these characters go from on top to free-falling and find each other in order to survive. Will they rebound? Who exactly will get hurt? And will there be enough time to save Jessica?

The book is extraordinary and brilliantly written.