I’ve always thought it was quite a fete when authors collaborate on a single novel. To imagine what it takes to put the minds of six writers together in the creation of a story is mindboggling. But that is what you get with Ribbons of Scarlet. This is an epic novel of women fighting for justice. It is a story about the sisterhood of female revolutionaries.

I have sat with my husband a number of times and watched A Tale of Two Cities (1935) with Roland Coleman. The Dickins classic captures much of the mindlessness of the French Revolution, and Ribbons of Scarlet piggybacks on the fanatics steering the ship. 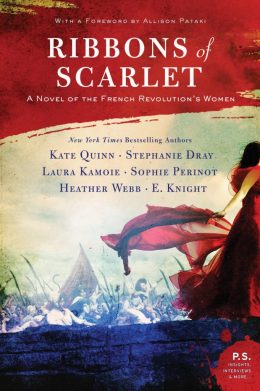 In 1786 French women had few rights much less any connections to politics. Then as revolution takes the country by storm,  several women forgo everything to further equal rights for women and expand free education.

One of these women, Sophia de Grouchy, would marry a partner who supported and cheered on women’s rights for equality. But Sophia’s passions were even greater than her love for her husband and her newborn child.

In her fight for reform, Sophia encounters a fruit seller, Louise Audu, who she takes in as an apprentice, and educates her about women’s issues. Louise finds strength in her training and leads a group of women through the streets into Versailles to topple the monarchy. Their fight is a threat to the men who have fought battles. Nonetheless, their point is taken, and the people have spoken regarding the starving nation under the king and his family.

While change seems to be underway,  the king’s sister, Princess Elizabeth, takes her family into the hills in the night, and in secret plots to restore the family to the throne. Meanwhile, a toppled monarchy doesn’t mean a peaceful Paris as extremists are split into three (Girondins to the right, Hebertists, to the left, and Dantomists, in the center) groups, and a new form of tyranny raises its ugly head.

The wife of a political appointee, Manon Roland, tries to use her pen to save the country, while others like Pauline Leon and steely Charlotte Corday feel violence is the only answer. It is a tug-a-war between factions that cannot calm fractured France. While in the background, one woman, a member of the oldest profession works to influence France’s most powerful man, Maximilien Robespierre – “the Terror itself.”

One Reply to “Ribbons of Scarlet – Book Review”