I’m a little late getting this out, but I wanted to share my experiences at the Second Annual #NCWine Bloggers Summit. They held the event at The Studio, a beautifully restored facility that is part of Hanover Park Vineyard. Built in the ’30s, the building has a vaulted wood-beamed ceiling and remarkable rustic elegance. I confess I first thought it had once been a horse stable, but learned that someone had built it to paint large trucks. It was a cozy and intimate setting for the summit, and with the gentle rain falling outside it had a warm, relaxing feel about it. (Some of that may have been the wine?)

Since we have been blogging I have tried to attend as many workshops and events connected with the craft to learn as much as I can. Last summer we missed the Wordcamp in Asheville (not this year) because we were moving, and plans to attend the one in Wilmington were derailed because of weather (Hurricane Florence).  Then as though handed down from above, a tweet from the NC Wine Guys announcing the summit flashed on my iPhone.

The event kicked off at a very responsible time of the morning with welcomes, introductions, and chocolate chip muffins. Unlike some workshops that focus on individual needs by breaking off into sub-groups (web design, blogging, online retail), the summit merged wine bloggers with the operators of NC vineyards. This component of the summit was genius; allowing everyone involved in the topics an opportunity to interact and communicate. 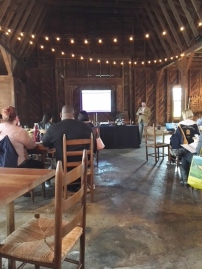 Social Media Best Practices was the first topic of the day. Presented by Bob Aycock, a Social Media Project Manager, and a big fan of local wineries (check out his adventures at Wine Carolinas). Bob outlined several key elements in managing the maze of social media platforms. Develop a content calendar which I am guilty of NOT doing and native posting directly on each platform. I’m a terrible phone typist, so I prefer an automated system. Create one item and allow software to post it on multiple platforms. But Bob has shined a light of reason on native posts, and I’ll work on it.

Next was a Panel Discussion: What Bloggers & Writers Expect When Writing a Story. The talk was led by veteran writer/bloggers Dathan Kazsuk and Jennifer Primrose of Triangle Around Town, and relatively new bloggers Jessica Byrd and Jessica Adams at The Wine Mouths. This

discussion was one of those times that for once I felt like I was on the right track. The entire panel followed our same style of wine exploration and looked for just about the same things when they visited a winery. This panel topic alone could have filled up the rest of the day, as it also gave the vineyard operators an opportunity to share what they would like to see from bloggers and posts. Again, this dialogue was a high point for me (at my first summit), and I hope that in the future it expands and remains both orderly and informative.

I confess to being a lazy blogger. Even now, a stack of topics looms before me. Stories and adventures to be told, but my mind and body are planted in front of the television for a Mannix binge weekend. Which is why I circled Jenn Nelson’s Maximizing Blogging and Social Media Content presentation in my summit program. I am always looking for a shortcut (my automated comment earlier) to get the job done well and posted so I can move on to the next project. Jenn was beyond energetic on the topic. Plan, Produce, Promote, and (re)Purpose were the bullet points of her presentation, and as an old school marketing guy, I found some of the new school marketing concepts a tad difficult to accept. However, after the summit, on the drive home, I mulled over some of her key points and suggestions. Jenn, you won me over, and I’ve already started developing my content calendar around some of those promote and (re)purpose ideas.

The summit’s final event was another panel discussion. Entitled Winemaking in North Carolina it featured four North Carolina Winemakers from across the state. To get the full flavor of this fun roundtable discussion, the summit hosts and founders NC Wine Guys maximized their time and recorded the panel’s comments for their podcast Cork Talk. Check it out.

Thanks to Matt & Joe for organizing and managing such an informative event. Thanks to the presenters who gave their time to put together meaningful lessons and willingly opened the floor to Q & A. Finally, thanks to the sponsors for supporting the event, and opening the door for us as bloggers to do a better job at promoting #NCWine. Looking forward to 2020.