I think from the minute I was placed in the cradle for bed my parents would lean down and say, “Who Knows What Evils Lurks in the Hearts of Men? The Shadow Knows.” This, of course, was the now classic tag to the famous radio series The Shadow.  As I got older, extended members of my family would also randomly toss out the tagline “The weed of crime bears bitter fruit! The Shadow Knows” or both lines in some paraphrased manner. Therefore, it was only natural that as I got older, I wanted to know whom The Shadow was, and his place in my life, for fear of him had always kept me on the straight and narrow.

Looking back, it is surprising how little information I could glean from my family.  He

was “a character on the radio” generally ruled as the pat answer. So he was “a disc jockey” I would query. That always got laughs from everyone for reasons I understand today. I would be in my teens before I’d discover not only about the radio Shadow but more importantly The Shadow in print.

I am not going to spend time in this review highlighting my years as a fan of The Shadow while being stuck in a tiny rural community in the south. Instead, I will tell you that I was not alone. There were and are many others, bigger fans that I could ever hope to be, who would make it possible for boys like me to read and discover the greatness of The Shadow.

One of those was Anthony Tollin, who today is the editor/publisher of Sanctum Books. Sanctum undertook the task of republishing the original Shadow pulps as they appeared in the 1930s and 40s. These gems from the past are well worth the $14.95 charged. Each book contains two adventures, original cover art, and interior illustrations.  Also, either Mr. Tollin, or another pulp historian will provide an interlude of information about the stories featured, the author, publishers, or something else from The Shadow world.

I recently dipped into my collection and plucked out issue #42, which features Bells of Doom and The Murdering Ghost. This was an excellent choice for my first pulp review because it displays the evolution of The Shadow, and its creator Walter B. Gibson writing as Maxwell Grant.

Classic adventure #1 Bells of Doom was published in 1935 and is a well-crafted tale of mystery.  It begins on an ocean voyage, involves raw gems from India, an enormous real estate swindle, and murder. The author weaves all these elements together, moving the ale along to a climax within the confines of a private mausoleum. Within the adventure you meet The Shadow’s primary agent Harry Vincent, you get a glimpse at The Shadow’s alter ego disguise Lamont Cranston, as well as a mix of characters from gangsters to the idle rich of the 1930s.  The thrust of the story revolves around a bell tower long closed down, but when murder is committed, the bells suddenly toll. Even when the clappers are removed, the bells toll another death. Who is the serial killer, what are the motives for the murder, and how can The Shadow stop the mastermind behind the Bells of Doom. 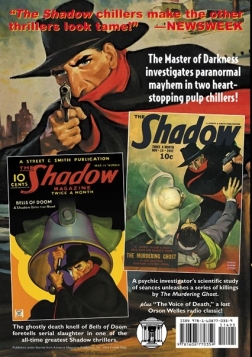 Back cover of Shadow Pulp reprint #42

The Murdering Ghost is classic adventure #2. Published in 1942 this tale reflects a change in the protagonist and the cast that surrounds him. Gibson was forced I believe, to include Margo Lane, a character from the radio series into the magazine stories. Other elements along the way also influenced the narrative, but Margo’s appearance in the novels resulted in less Shadow and more Lamont Cranston. We also get some sappy dialogue that seems out of place. This story, however, isn’t bad, and we get a fair dose of The Shadow, but he is not the same caliber of crime solver or mysterious figure as in the previous tale. What does make this is a good story is the central plot. Contacting the dead through mediums was big business in the 1930s and 40s. Unmasking fakers was also front-page news, and this tale involves both. Gibson had knowledge in this area having worked with magicians like Harry Houdini, whose own crusade at debunking the occult frauds is legendary. Within the pages of this novel, you will get a first-hand account of many of the methods used by mediums to reach beyond the veil, as well as discover, how these tricks worked. Best of all a surprise twist ending will unveil a murderer you never expected.

How can I get this book?

Once upon a time, I saw these pulp reprints on the shelves of Border Books. Today finding these novels in a bookstore would be amazing. The easiest way to get them is online. A couple of my favorite online sellers are Vintage Library and Bud’s Art Books. I have also seen them on Amazon, but be careful, lots of collectors out there are selling original pulps which are far more expensive. Make sure it’s a reprint.